The 59th Presidential Inauguration occurs on Wednesday, January 20, 2021. Whether you are a resident or business owner, stay informed and have a plan for the inauguration week.

Security measures to keep the community safe during the upcoming inauguration are already taking place. MPD reports the following road closures are in effect until further notice (among others):

The following bridges will be closed to vehicles, pedestrians, and cyclists beginning Tuesday, January 19, 2021 at 6:00 a.m. These closures will remain in effect until 6 am, Thursday, January 21. See below for information specific to each of the affected bridges:

Essential employees who normally cross these bridges to access their place of employment are encouraged to seek access to Washington from the east via 295 North at E. Capitol St., Benning Rd. or New York Ave. (Route 50). 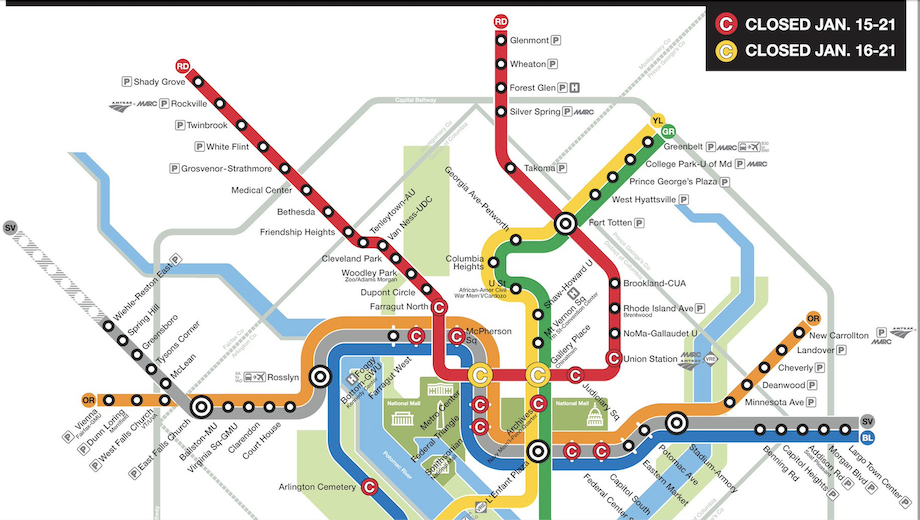 Metro announced service adjustments for Metrorail and Metrobus to accommodate the expanded security perimeter that will be in effect for Inauguration beginning Friday, January 15 through Thursday, January 21.

Metro will close 13 stations inside the security perimeter, with 11 stations closing on Friday and two additional stations on Saturday and continuing through the end of service on Thursday. During this time trains will pass through the closed stations without stopping.

Additional station closures and bus detours may be necessary on a temporary basis during this period for security reasons.

The National Park Service, at the request of and in cooperation with the United States Secret Service, will implement a temporary public closure of the National Mall beginning at 11 a.m. on Friday, January 15 and extending through at least Thursday, January 21.

The following areas will be closed to public use: 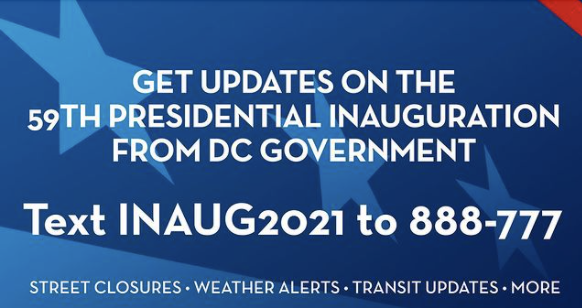 To stay up to date on the 59th Presidential Inauguration from DC Government, text INAUG2021 to 888-777 for updates on public safety, street closures, weather alerts, transit updates, and more.

If You See Something, Say Something

If you see or hear anything that appears out of the ordinary, contact police. To report immediate threats or emergencies, call 911. To report suspicious activity or behavior, call (202)727-9099. You can also report online using MPD's iWATCH website iwatchdc.org or use MPD's text tip line at 50411.

The Bowser Administration has created "No Guns on Premises" signage for businesses that want to make it clear that guns are not permissible in their establishment for use during the 2021 Inauguration.

If you are wondering if you local bank, library, or other business is open the week of inauguration, give them a call to see if there are any adjustments to their hours or operations.

Capitol Bikeshare stations around the National Mall, Capitol Hill and Union Station will be unavailable until further notice. View map of closed stations.